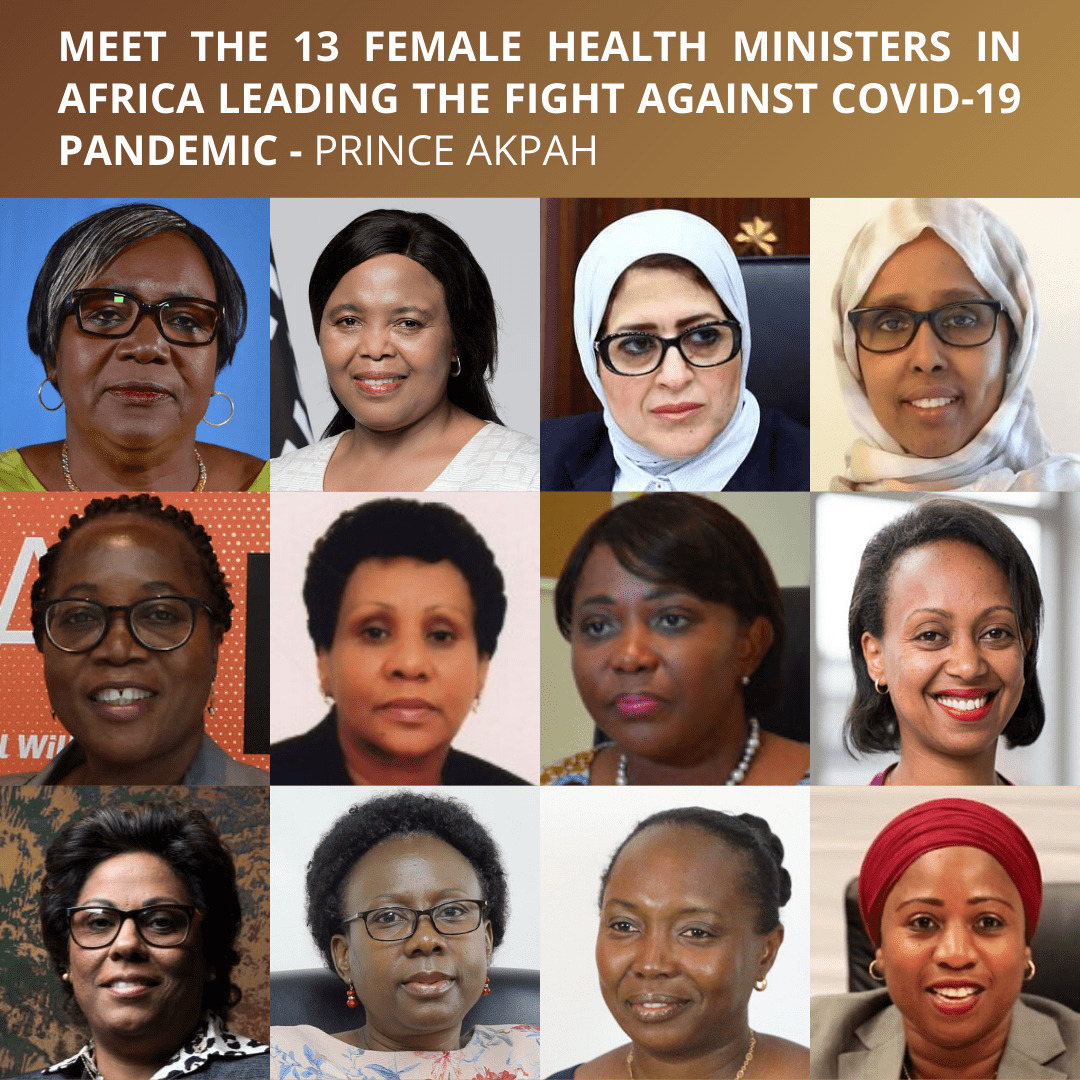 Across the world, the Coronavirus has not only become another disaster to wipe us all out of the earth but has also put the spotlight on the level of competence of our political leaders.

In Africa, the case is not different as governments are putting in draconian measures to halt the spread just like their counterparts in Europe and Asia.

With the eminent role health ministers are playing in fighting this global pandemic, I delved into a special finding to uncover the female faces leading the battle and definitely deserve commendation for the works, they have put in so far albeit sorrowful to know that, their works are faced with several challenges because of the under-resourced facilities they manage and how they will be risking their lives in the battle against the virus.

Beyond their competence, they have proven to stand tall in the delivery of their duties as their role in this pandemic go beyond providing counsel to the presidents but an opportunity to manage the global crisis, as they provide all kinds of support to doctors, nurses, and other health workers in their countries while also collaborating with their counterparts to make sure patients receive treatment and citizens are well informed about the situation in their countries.

In my research on 51 African countries, Africa has only 13 female ministers in charge of health across the continent. Out of the 13, 9 are medical doctors and the others were appointed based on their political leadership track records. She was appointed in 2009 as minister of health in Eritrea. She previously held positions such as Minister of Tourism and is a leading member of the People’s Front for Democracy and Justice in Eritrea. Dr. Zayed served as President of the 57357 Academy of Health Sciences, Chairwoman of the Supreme Committee for Combating Corruption at the Ministry of Health and Advisor to the Minister of Health and Population

Dr. Zayed supervised a series of national projects in the health sector, in which the World Bank, the World Health Organization and many international donors contributed. Jacqueline Lydia Mikolo is Congo Republic’s Minister of Health and Population since May 6, 2016. She was previously Public Procurement and Regulatory Coordinator at the Department of Major Works

At the 69th World Health Assembly, held May 23–28 in Geneva, she presented the Congolese Health Program, entitled “The march towards development”, which sets itself as a primary goal to facilitate access to health for the population with inexpensive and quality care over the period 2016-2021. This goes through several achievements such as the establishment of universal health insurance, the construction of general hospitals in all departments, the strengthening of the management of certain diseases or the maintenance of free access to care for certain segments of the population.

Dr. Léonie Claudine Sorgho / Lougue is a radiologist doctor, university Professor of radiology, medical imaging and radio diagnostics. She was Director of the Research and Training Unit in Health Science, Ouaga I Joseph KI-ZERBO University in Burkina Faso from 2015 to 2019 and member of the jury of the 18th and 19th Human Medicine, Pharmacy, Odontology, Veterinary Medicine and Animal Production aggregation competitions at CAMES. Dr Lia Tadesse Gebremedhin is Ethiopia’s minister of health. She was previously the executive director of the Center for International Reproductive Health Training at the University of Michigan. She previously served as project director for the Maternal and Child Survival Program at Jhpiego Ethiopia. Lia also led research in Reproductive Health, Public Health and OB-Gyn.

She earned her doctor of medicine and master of health care administration at Jimma University, and specialized in obstetrics and gynaecology at Addis Ababa University. She was President of the Instituto de Mulher e Criança, Director General of Social Solidarity and Family, Head of the Department of Information and Professional Guidance, Employment Technician of the General Directorate of Labour, Employment and Professional Training (DGTEFP) – Ministry of Public Service and Labour.

She twice occupied the portfolio of the Secretary of Hospital Management in the current government before she was promoted to take up the role of Minister of Public Health, Family and Social Cohesion. A paediatrician by profession, Nazira Abdula graduated from Maputo Central Hospital with complementary stages in the Hospital São João do Porto in Portugal. Abula earned a Master’s degree in Nutrition and Dietitian from the University of Flinders, Australia, in 2006. She worked as a general practitioner at Medical Mavalane General Hospital from 1993 to 1997 and was involved in the program to combat malaria in the Mavalane area. During the cholera epidemic of 1997, she led the cholera infirmary of Maputo Central Hospital. She has taught at the Catholic University of Mozambique, and in the Health Sciences Institute of Maputo and Beira. Having been Deputy Minister of Health from 2010 to 2014 in the previous administration, Abdula was appointed Minister of Health in January 2015. Jane Ruth Aceng is a paediatrician and the Minister of Health in the Cabinet of Uganda.

She previously served as the Director General of Medical Services in the Ugandan Ministry of Health.

Her service began when she was a medical officer in the health ministry. Before her appointment as the Director General of Medical Services, she was serving as executive director of Lira Regional Referral Hospital. Sílvia Paula Valentim Lutucuta, is a Physician, Cardiologist and University Professor, Head of the Postgraduate and Scientific Research Department at the Faculty of Medicine, with experience in Research – Molecular Biology and Genetics of Cardiovascular Diseases.

She entered the Faculty of Medicine Universidade Agostinho Neto-Huambo at just 16 years old, completed her degree in the 6 years established in 1990, as she was the youngest and best student, at just 21 years old, she was offered a scholarship. Immediate Postgraduate study and inspired by her maternal grandmother, a great nationalist Angolan woman who always defended the importance of advanced training in women, her emancipation and economic independence who suffered from severe Heart Disease, she specialized in Cardiology at Hospital Santa Maria in Lisbon – Portugal- Head of Service Celeste Vagueiro and integrating the team of Prof. Doctor Fausto Pinto.

With the growing need to reinforce the teaching staff of the FMUAN Department of Medicine, she was then transferred to Luanda during the internship and became a supervisor of this department and after completing her degree she moved to the Assistant category, an activity that was interrupted during her training abroad. Ummy Ally Mwalimu is the Minister of Health, Community Development, Gender, Seniors and Children in the Cabinet of Tanzania since 2015. She is a two-term Member of Parliament, appointed to a seat reserved for women. Dr. Wilhelmina Jallah is Liberia’s minister of health but was previously the head of obstetrics and gynaecology at the John F. Kennedy Medical Center in Monrovia, Liberia,

She helped provide medical services to young survivors of rape, many of whom require fistula repair surgery and has practised medicine in Liberia for a very long time. 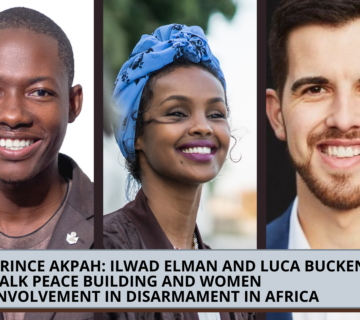 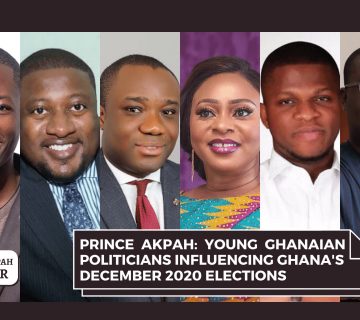